We opted for the School Holidays option - Behind the Scenes Tour at the Penguin Parade when buying our tickets. It was an extra $25 for our family of 4, on top of our 3 Park Pass.
Arriving at 4:30 pm, we were met by a ranger who gave us an informative tour as we walked along the boardwalk leading down to the beach seating area.
Curious wallabies appeared either side of the boardwalk as we began our tour. 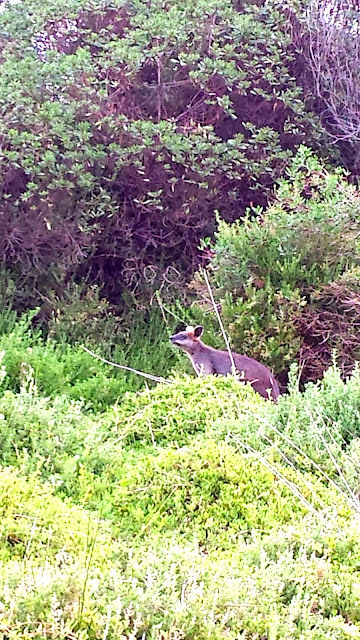 Lots of feathers outside this burrow was a sign of the resident Little Penguin moulting - a ritual that leaves them stuck on land for over 2 weeks, until their new feathers grow enough to allow them to enter the water again.
I imagine they would have a serious case of cabin fever after that amount of time away from their watery world - not to mention how hungry they would be! 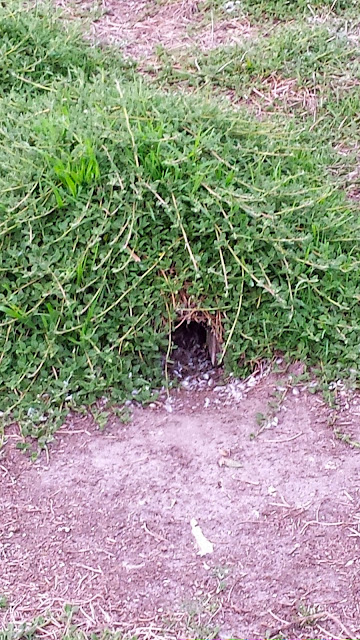 The ranger told us about the knitted jumpers that were sent from all over the world last year, to keep the penguins warm after having oil spills washed off them.
The centre was inundated with jumpers and they were handing out one each to the young children on the tours. The five young'uns in our group were so excited to receive such a fab gift and couldn't wait to dress up their  furry friends at home.
Eric's was a little, err...snug, but he still looked pretty cool.
(Eric has obviously not been fasting inside a burrow for 2 weeks...) 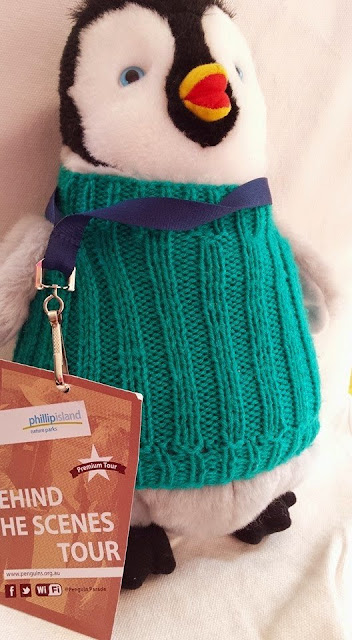 Our short tour ended at the seating area by the beach. It was only 5pm and the penguins weren't due in until 6:30, so we decided not to take advantage of the front row seats and went inside for dinner instead.
Oh, did I mention it was FREEZING?! I mean seriously FREEZING! Like put ALL your winter coats on and then add one more, type FREEZING. 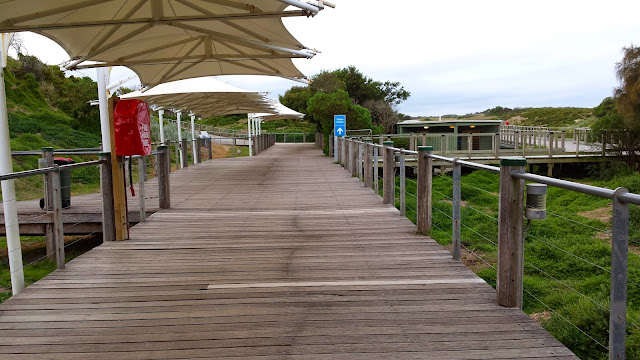 Our walk back coincided with a huge stampede of people RUNNING towards us, in an attempt to get prime seating position. Yikes!

We came back after a bite to eat (burgers and sushi from the cafe) and managed to see lots of penguins coming to shore.  We then stayed on the boardwalk, where you can get a much better view of these little guys and gals as they make the big trek up the hill to their burrows.
The penguins make lots of rest breaks on their journey and there is lighting along the walkway to illuminate your view.
It was really cute to watch the moulting land-lubbers come out of their burrows and say Hi to their friends arriving from the ocean.

The only annoying thing was the amount of people taking flash photos right in the faces of these poor little critters. You could see the penguins stop and blink from the bright lights in their eyes.
Stop it, flash photo people!!

If you can't get there for the sunset parade, there are display boxes inside the centre, with glass peepholes for watching the penguins that live in them.

What: Penguin Parade
Where: 1019 Ventnor Rd, Summerlands
When: Daily from 10am

Why: Little Penguins, wildlife, nature
How Much: various pricing options