Two shiny locomotives sat at the end of the platform when we arrived for the first train out of Belgrave. The green 6A and the brown 7A were whistling, hissing and blowing smoke in unison, waiting to begin the journey to Lakeside Station. 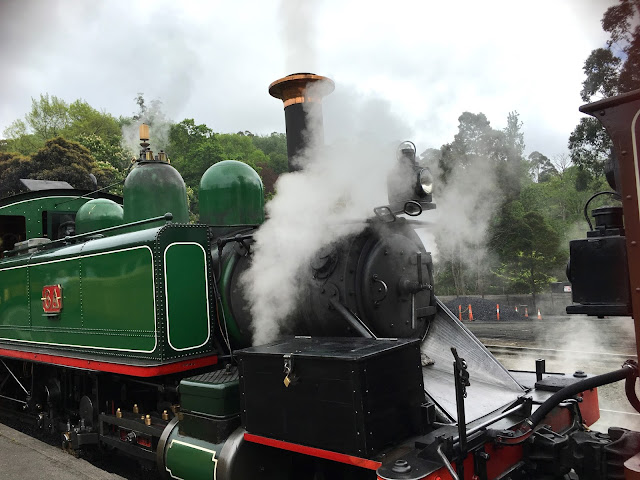 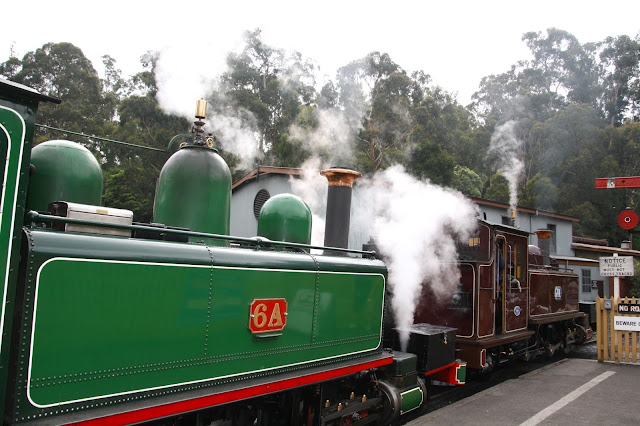 No allocated seating meant that we had to arrive about 30 minutes before departure to ensure the four of us sat together on the same bench seat. 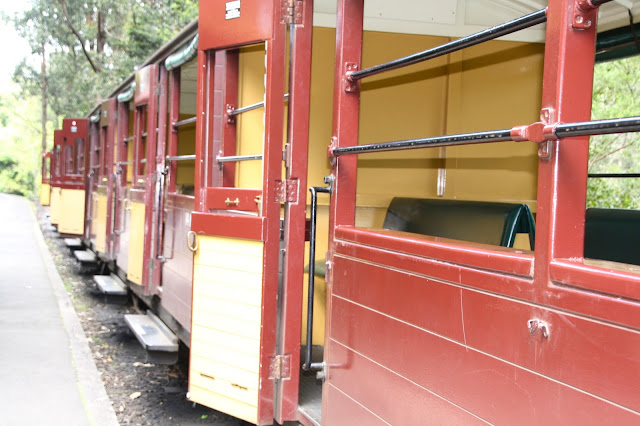 We chugged along the narrow gauge railway track, waving at every car at the numerous crossings (11, I think) and seeing the passengers in the other carriages as the engine snaked its way over a bridge and around the many bends.
The brown engine left us at Menzies Creek, as it hauled some of the carriages back to Belgrave. We continued on with our green engine and the remaining carriages. 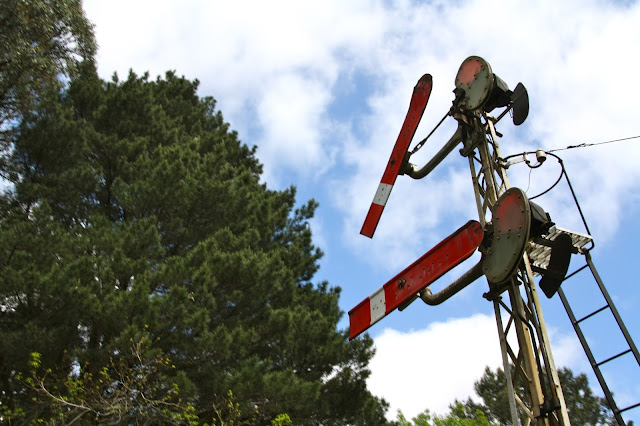 At Lakeside Station, we were met by this guy. Undercover ticket inspector, perhaps? 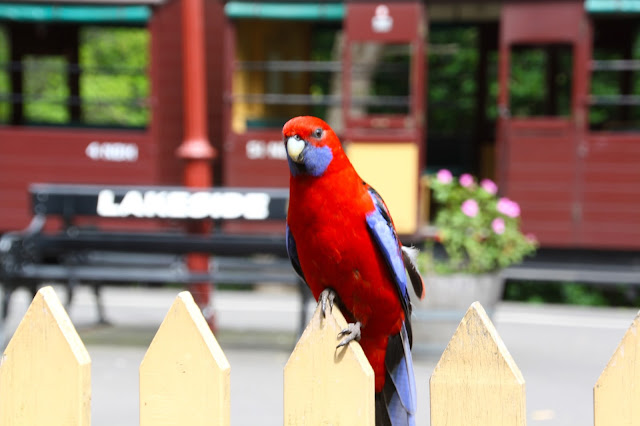 With regular return trains back to Belgrave, we decided to stay at Emerald Lake for a couple of hours - you can read about this great destination of lake, walking trails and wildlife here.

Back on the popular 2:30 train, it was very busy. We boarded early again, just to be sure we didn't miss it, and sat on the other side of the train to get a different view.

We made a short stop at Menzies Creek station, where a second platform allows trains to cross paths at this point.
The station itself was gorgeous. A rosella sat in a tall tree with white and yellow blossoms, which blew down to the ground like confetti.. 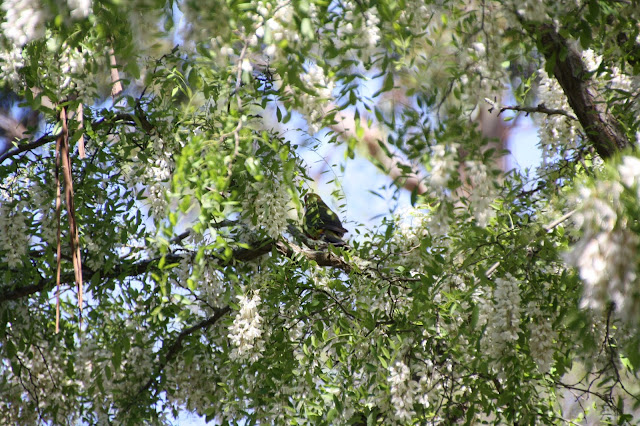 Brightly coloured flowers were planted in barrels on the platform... 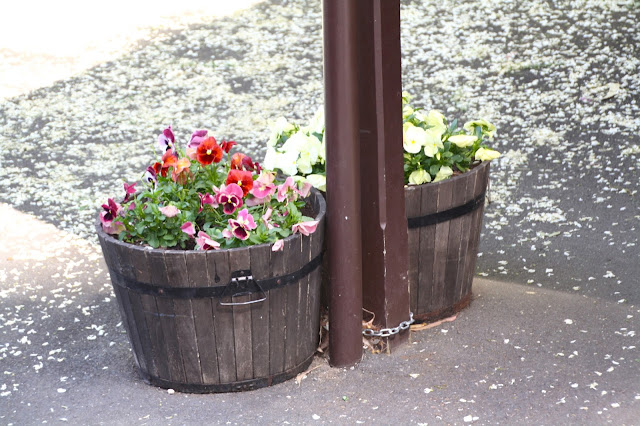 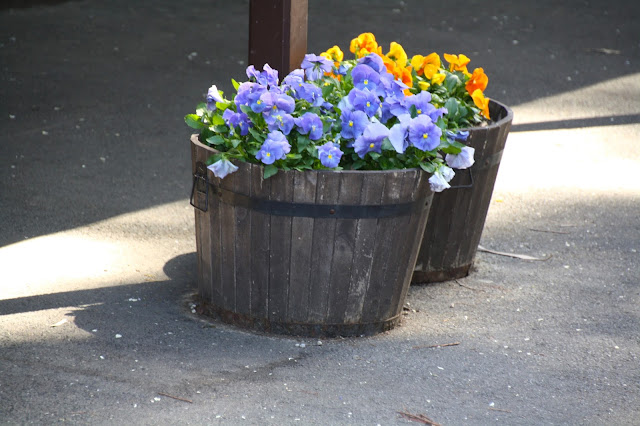 ...and these old fire pails hung on the wall. 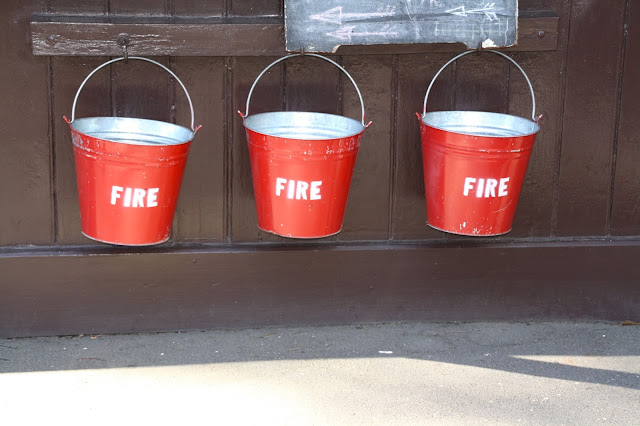 We set off again for the last leg, through forests of Mountain Ash and Soft Tree Ferns. Wildflowers in every colour imaginable, lined the tracks on both sides and we admired the properties that abutted the railway line. 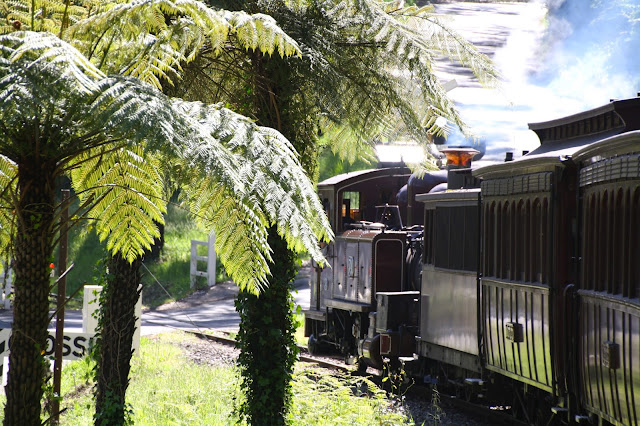 We crossed the famous timber Trestle Bridge again, over Monbulk Creek.  The 15 span bridge is 91m and 42ft high and classified by the National Trust. 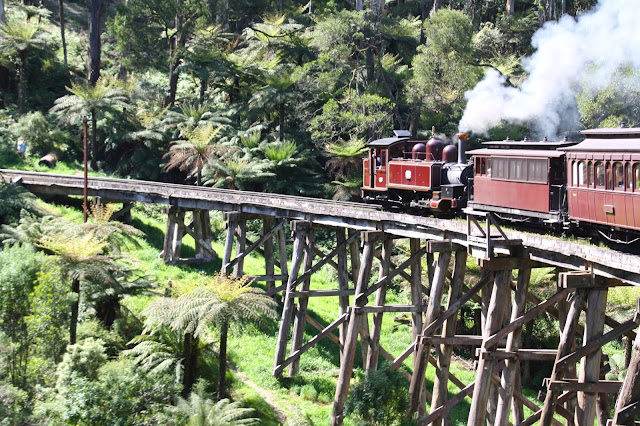 There's a carpark underneath where you can get a good view of the trains crossing. Here is the 1970 built DH31, a former Queensland Railway diesel locomotive, taking open carriages back up the line. 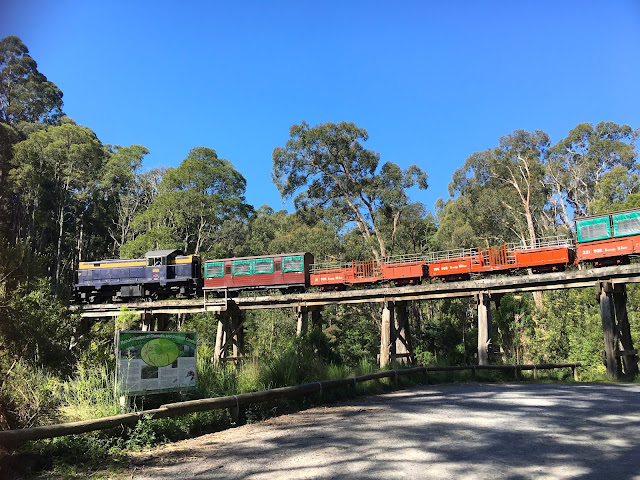 At Belgrave Station, we said goodbye to Puffing Billy and thanked him for another fun day in the Dandenongs.
P.s. If you're interested in trains, have some spare time on a regular basis, and think you'd like to be part of the Puffing Billy story, they are always looking for volunteers to join their crew. Sounds like a great gig to me. 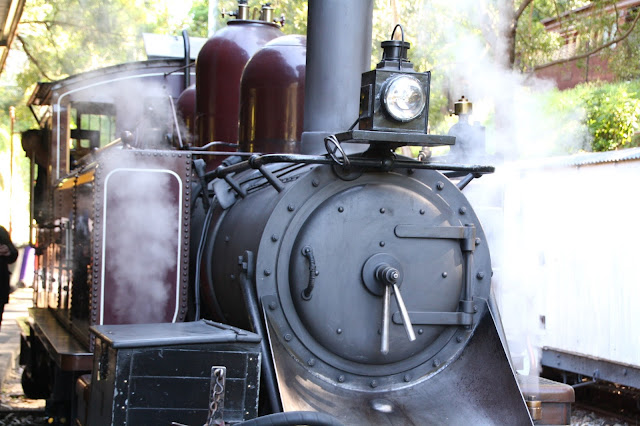